Happy New Year!  I hope everyone had a happy and safe Holiday Season and I wish you a happy, healthy and prosperous New Year!  We are going to start this year out with two wonderful new wines by a French producer Michel Chapoutier.  If the Chapoutier name looks familiar it is because I did the Cotes Du Rhone by Chapoutier back in October of 2012.  We are especially excited about these wines because the red made the Wine Spectator top 100 for 2012 and was rated 90!

Domaine de Bila-Haut The Roussillon history is complex and compelling, and has at times been quite violent. Terraces on stony soil, with a rich geological background and a climate that man has adopted for his crops. The Roussillon was bound to attract Michel Chapoutier’s attention. He decided to locate his domain at Latour de France. Black and brown schist to give the wine a solar touch. Gneiss for minerality and freshness. Combination of Limestone and chalk for strength and balance. Three varieties of grapes grow on the land covered by Domaine de BILA-HAUT. Syrah, with its savage aromas of scrub and spice. Grenache, so full of surprises. And Carignan, for mineral wines with crispy tannic notes. The “Vignes de BILA-HAUT” and the “Domaine de BILA-HAUT Occultum Lapidem” are the main expressions of this region. 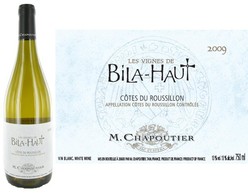 The white wine from Chapoutier that we chose this month is the Bila-Haut Cotes Du Roussillon 2011.  It is a blend of Grenache Blanc, Grenache Gris and Macabeu.   A part of the grapes comes from limestone and clay soils in the Agly Valley; the other part from granite soils at higher altitude (500m, later ripening sites).    Grapes are hand-harvested.  After pressing, the must is cold-settled. Vinification is performed in temperature controlled stainless steel tanks.   Ageing lasts a few months in order to keep all the freshness and enhance the minerality.     COLOUR : pale yellow colour with green tints. NOSE : the wine exhibits citrus aromas (lemon, grapefruit) with smoky notes. MOUTH : fresh and very aromatic attack. The palate is round, with a great acidity (coming from the later ripening sites at higher altitude). A lot of freshness on the finish mixed with salty notes, which express the minerality of the wine.   This wine will go with a wide variety of foods.  Try it with shellfish or any light chicken or port dishes.   Retail $14.99 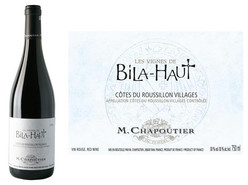 The reds made by Chapoutier in the Roussillon area come from grenache grapes from 70 year old vines, grown on a magnificent plot in the heart of the ‘Garrigue’ scrubland. Enthusiasm, richness and complexity. Then Syrah grapes, ripened slowly on vines grown on clayey limestone soil giving powerful, silky-smooth tannins, and blended with Syrah grapes grown on the company’s most beautiful schist based land. An elegant bouquet and a sophisticated flavour in the mouth. Also exceptional because it is bold, like the people who gave this land its identity.

The Chapoutier Bila-Haut Cotes Du Roussillon Villages is a blend of Syrah, Grenache and Carignan.  The plots are located on the slopes of the high Agly Valley. They are composed of gneiss and schist from the Devonian Period.   The crop is hand-harvested.        Entirely destemmed. The extraction is only performed by punching of the cap. The maceration lasts from 2 to 4 weeks according to daily tastings.    The wine is aged in vats.  COLOUR : deep garnet red. NOSE : aromas of black cherry. MOUTH : this wine is fleshy, well-structured with the warm and savage of soils of the Roussillon area. To drink within 2 years.  Also a great versatile food wine, it pairs well with almost any red meat dish or a spicy pasta with tomato sauce.  $14.99 Retail 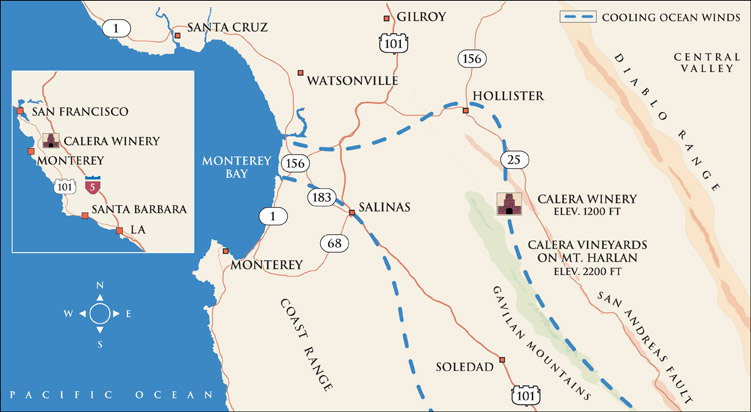 This month I chose two wines from one of the greatest Pinot Noir and Chardonnay producers in all of California called Calera.  Josh Jensen’s winemaker mentors in Burgundy were adamant that pinot noir and chardonnay must be grown in limestone-rich soils, as present in the Côtes d’Or, to make great wines. Upon his return from France in 1971 he spent two years searching throughout California to find limestone before finally purchasing, in early 1974, a high-elevation parcel with a limestone deposit of several million tons.

Located 90 miles south of San Francisco and about 25 miles inland from the Pacific Ocean, it is near Mt. Harlan in San Benito County. Its elevation is 2,200 feet above sea level, making it one of the highest and coolest vineyard properties in California. 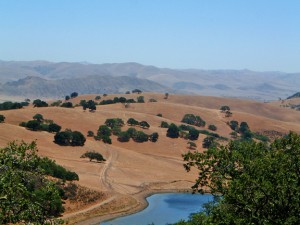 In 1975, Josh planted his first 24 acres of pinot noir in three separate parcels. In the Burgundian tradition, he named each parcel individually to emphasize the fact that each would produce a distinct wine. The original plantings are the Selleck Vineyard (5 acres), Reed Vineyard (5 acres), and Jensen Vineyard (14 acres). These vineyards produced their initial tiny crop in 1978.
Josh purchased a neighboring 300 acres of the limestone laden mountain in 1982. When he planted 2 acres of viognier on its slopes in 1983, he was one of California’s first winemakers to explore this variety.
In 1984, on these same slopes, Josh planted his first [chardonnay] vineyard (6 acres) and his fourth pinot noir parcel, the Mills Vineyard (12 acres). In 1989 he added 3 more acres of viognier.
A 13 acre parcel of pinot noir was planted in 1997, in a steep field that lies between the Jensen and Mills Vineyards. In 2007 the vineyard was name de Villiers and for the first time labeled as a single vineyard pinot noir. In 1998 5 acres of chardonnay and 10 acres of pinot noir, were planted on the south western slopes of the limestone peak. The pinot noir vineyard was dubbed the Ryan Vineyard. The vineyards are further explored in Vineyards.
Calera is also one of the original producers of Aligote in California. Approximately half an acre total is in production between locations in the Jensen and original chardonnay vineyards 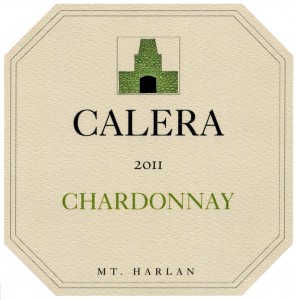 Honeycomb and citrus zest, sandalwood, wild rose and jasmine; such a beautiful bouquet emanate from this 2011 Mt Harlan Chardonnay. Flavors of soft French oak, limestone minerality and sweet cigar accent Pippin apple, pear and crème brulée. Smooth and silky on the palate and lush like vanilla caramel. This wine is tight in its youth, hinting to a long life ahead. This is a great wine to sip on it’s own and enjoy.  $ 29.99 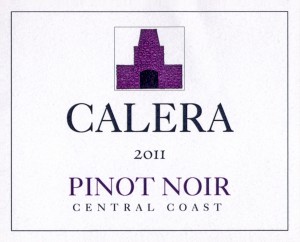 Plum, pomegranate, pink rose petal, boysenberry and the slightest hint of watermelon candy dance from this 2011 Central Coast Pinot Noir. It’s full of boysenberry and spicy cherries jubilee character with nice brightness and delightful flavors of black raspberry and sweet oak. A bit of tartness accents the soft, flowing texture and lively finish.  Pair this Pinot with some grilled salmon and enjoy.  $ 24.99 Retail