Click on the image above to see what’s on Sale! 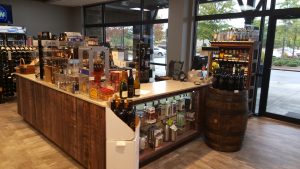 The Oconee Cellar has finally made the move to their new location, which will ensure that they continue their ranking as “The Best Wine & Spirits Store in Georgia’s Lake Country”. 15 years to the day, The Oconee Cellar moved to their new location on the other side of the Publix Supermarket next to Subway. As soon as you walk into the store, you will notice a much more user friendly, wide open floor plan, beautiful LED lighting, new tiled floors, highly visible glassed in wine cellar, walk-in beer cave, and much more! 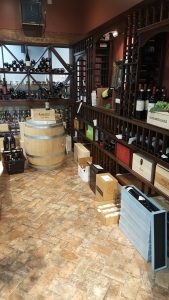 “We have been talking with Publix for over 2 years trying to make this move happen, and on November 1st it finally became a reality. I believe it is a real positive for The Oconee Cellar and my customers. We were able to fix all the things that troubled us in the old location and really use my 18 years of experience to create an improved consumer-friendly shopping experience. I am so happy and proud of the new store.”, says owner Matt Garofalo.
“It took a lot of great people to make this project a reality. From my realtor Ted Baker, my builder
Ed Blume, interior decorator Maryln Alea, the entire Oconee Cellar staff, my wife Daniela, my parents, my architect Steve Kippels, and so many more, I am eternally grateful for all their contributions.”, states Matt.
Stop by their new store and see why The Oconee Cellar seems to be well on their way to 20 more years of continued success in The Lake Oconee area. 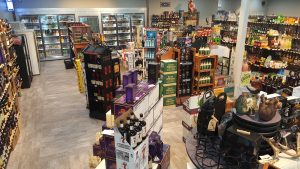 The story of Victory Brewing Company starts on a school bus in 1973 when fifth-graders Ron Barchet and Bill Covaleski stepped aboard, on their way to a new school. The two became fast friends and remained so, even as they grew up and went to college on opposite coasts.

Just months out of college, Bill’s appreciation of good beer and access to his father’s home brewing equipment inspired him to explore the hobby. That same year (1985), Bill gave Ron a home brewing kit as a Christmas gift. With that, both Bill and Ron developed their love of the craft, and a friendly rivalry grew between the two. The good-natured competition pushed Bill and Ron to become accomplished home brewers, and as they both grew disillusioned with their jobs in the corporate world they realized their combined skill and love of brewing could pave the path to successful careers as brewers.

Ron left his job as a financial analyst and started an apprenticeship at Baltimore Brewing Company (BBC), working under a Dutch-born and German-trained brewer named Theo DeGroen. After working there for nearly a year, Ron had the necessary prerequisites to move on to study at the Technical University of Munich at Weihenstephan.

Immediately upon Ron’s departure, Bill took over his emptied role in Baltimore. While Ron was enhancing his German brewing knowledge, Bill was expanding the line of beers produced at the BBC to include several German specialty beers, many of which went on to win multiple awards at the Great American Beer Festival. After his time at BBC, Bill completed his brewing studies by traveling to Munich, Germany to attend Doemens Institute.

After Ron’s year of education in Munich, he returned stateside and took a role at Old Dominion Brewing Company in Virginia. Over the course of four year as the brewmaster there, he helped to increase production from 1,500 barrels annually to nearly 15,000.

With knowledge, experience and a love of quality beer in place, Bill and Ron decided they were ready to open their own brewery near where they first met in Pennsylvania.

Since then, Victory has increased the size of the restaurant to 300 seats. The brewery has also expanded, producing  93,196 barrels of beer in 2012. As loyal craft beer drinkers continue to show their dedication to flavorful, quality beer, Victory plans to continue its own growth.

Subtly sweet with a delicate malt nose, our Festbier gains its impressive body from our use of all imported German malts and decoction brewing process.

For the inaugural month of The Oconee Beer Club we chose The Dogfish Head Namaste.

The Story of Dogfish Head

The story of Dogfish Head began in June of 1995 when we opened Dogfish Head Brewings & Eats, the first state’s first brewpub opened in the resort beach community of Rehoboth Beach, Delaware. The plan was to bring original beer, original food, and original music to the area.

Not only was Dogfish Head Delaware’s first brewpub, it was the smallest commercial brewery in America. Our very first batch, Shelter Pale Ale, was brewed on a system which essentially was three little kegs with propane burners underneath. Brewing 12–gallon batches of beer for a whole restaurant proved to be more than a full time job. When the doors to the pub first opened, we brewed three times a day, five days a week! The one benefit to brewing on such a small system was the ability to try out a myriad of different recipes. We quickly got bored brewing the same things over and over – that’s when we started adding all sorts of weird ingredients and getting kind of crazy with the beers!

The beer wasn’t the brewpub’s only draw. The pub’s menu centered on a wood-burning grill. We soon became known as the place to enjoy fresh grilled seafood, burgers, pizzas and sandwiches. The wood–burning grill imparts a unique flavor to everything on the menu, whether it’s a hearty sandwich, a delicate piece of fish or our signature pizza dough.

With the popularity of the pub growing, it was quickly apparent that the 12–gallon brewery would not keep up with demand. We built a new brewery and underwent a thirty-fold expansion of the brew house!

The reputation of Dogfish Head ales quickly grew beyond Delaware’s borders. Calls from Philadelphia, Washington, D.C., and beyond poured in, as thirsty restaurant patrons demanded their favorite beach beer at home. We began bottling our Shelter Pale Ale in 1996 and just 1 year later we expanded again – this time we separated the packaging operation from the restaurant, and kept on brewing! By 1999, we were up to five year–round bottled brands in about a dozen states.

We outgrew our distributing brewery in a couple years and in the summer of 2002, we moved our entire production brewery up the road to Milton, Del., into a 100,000-square-foot converted cannery. Around the same time (just to keep thing interesting), we built a distillery on the second floor of our Rehoboth Beach brewpub, so we could make vodka, rum and gin.

A witbier bursting with good karma. Made with dried organic orange slices, fresh-cut lemongrass and a bit of coriander, this Belgian-style white beer is a great thirst quencher.  Namaste was originally brewed at their pub in Rehoboth Beach with their Italian friend Leo from Birra del Borgo. It was a tribute to their friends at 3 Fonteinen brewery in Belgium, who had devastating production loss (1/3 of their annual production) in 2009.