The red selection comes from the Apaltagua Winery, located in the prestigious Apalta region in Chile’s Colchagua Valley, which specializes in one distinguished, but lesser known, grape varietal – Carmenère. Carmenère is considered the “lost Bordeaux” variety, as it was originally planted in Bordeaux, but was abandoned there because it was too late ripening for the Bordeaux climate. Thankfully, the Carmenère variety was imported to Chile where it not only survives (because of a longer growing season), but makes exceptionally good wines. 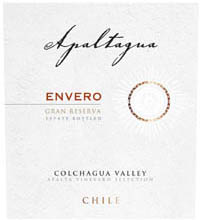 Apaltagua, owned by the Edward Tutunjian family, has a missionary-like zeal in its dedication to the Carmenère grape. The winery produces three levels of Carmenère-based wines: Apaltagua Estate Carmenère, Apaltagua Envero, and Apaltagua Grial. The resulting wines exhibit a chocolately richness and a peppery edge, combining the best of Merlot and Cabernet Sauvignon in one grape.

The 2009 Envero Carmenère exhibits dark, rich fruit is complemented by eight months in French oak. All the fruit comes from the Apalta region of Colchagua, with the vines over 50 years old. A complex offering from one of Chile’s leading winemakers, Alvaro Espinoza. A prior vintage was among Wine Enthusiast’s “Top 100 Wine Buys.” The ’07 vintage was awarded a “Best of Class” Gold Medal at the New World International Wine Competition. Pair with steaks and chops.  Retail $15.99

The William Cole 2010 Albamar Sauvignon Blanc comes from vineyards that lie deep within Chile’s prestigious Casablanca Valley—often called “Chile’s Burgundy.” This cool climate vineyard near the coast, which is comprised of over 129 contiguous hectares, provides a long, warm growing season with cool nights to develop excellent acidity. Owned by Bill Cole and his Chilean family, the winery specializes in cool climate varieties, and the wines are crisp, clean and complex. The winery makes two lines: Albamar and Columbine Reserve.  This wine shows excellent fresh fruit character and flavors of meyer lemon and crisp apple. It is bone dry and very food friendly. The 2010 Albamar Sauvignon Blanc is named a “Best Buy … Sea bass ceviche would match the acidity and mineral freshness of this sauvignon. Everything seems to be citrus here, and time in the glass doesn’t diminish the wine’s spark and vibrant flavors.” 90 points. Retail $12.99 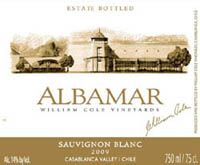 Located to the southeast of the appellation of Touraine in France’s Loire Valley, Valencay is a region that is as unknown in France as it is in the United States. Unlike most of the other Loire valley wine regions, Valencay is not located on the Loire river but is split and based around another river called the Cher. The Cher also flows through the appellations of Touraine and Montlouis-sur-Loire before it eventually joins the Loire.

Valencay is an agricultural region like much of the rest of the Loire and is best known outside of the area for the cheese that bears its name. Several varietals are allowed in the AOC including Gamay, Cabernet Franc, Pinot Noir, Cot (Malbec), and Sauvignon Blanc. The reds are often blended and the Sauvignon Blanc can often be found as a bottling on its own like in the neighboring Touraine appellation. 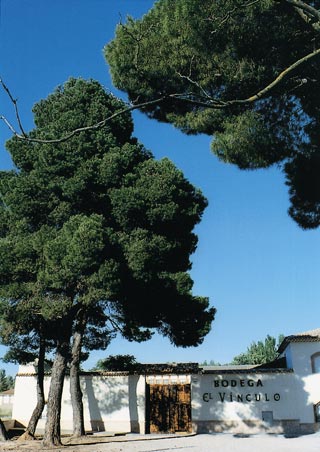 In 1999, the discovery of old, head-pruned Tempranillo (Cencibel) vineyards amidst a sea of white (Airén) grapes convinced Alejandro Fernández, of famed Tinto Pesquera and Condado de Haza in Ribera del Duero, to undertake one last bodega, in the historic windmill village of Campo de Criptana. Contracting with selected growers for low yields and early, select harvesting, unprecedented balance and structure for the region has been achieved.  The Tempranillo vineyards located in La Mancha follow the same cycle as those in the Duero area, or almost.

Although the land is flat, the mountains that surround the whole region make it difficult for wet fronts coming in from the sea to penetrate. Annual rainfall ranges from 300 to 400 mm per year and droughts, sometimes for prolonged periods, affect this area. That is why careful drip irrigation is essential to ensure top-quality grapes are available at harvest time. 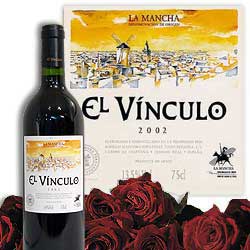 The wine has an attractive ripe cherry colour with garnet and violet coloured glints.  The bouquet is distinguished by sharp fruity aromas wrapped around by impeccable oak aromas that provide hints of spices. There is a background of scrubland and rockrose as well as toasted whiffs that give this wine elegance.

It is very smooth upon entry to the mouth. Very fruity, lush, strong and balanced tastes as it slips through the mouth. It is accompanied well by grilled red meat, stewed red meat, farmyard poultry roasts and magnificent semi-cured cheeses such as Manchego, Idiazábal, Roncal or Castellano.